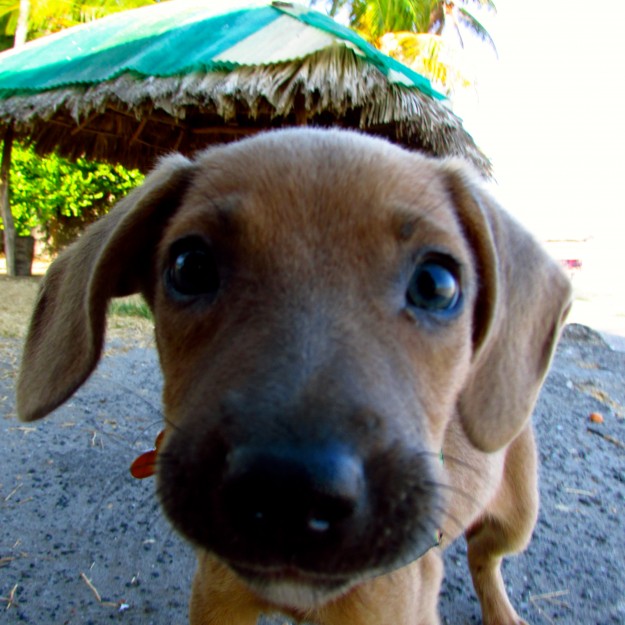 Um, no! This is, and always will be my blog, thank you very much! Clearly there is nothing going on in her head, what would she even tell you about? Ugh! Anyway… I’m here today to tell you about El Salvador, the fourth country we have visited on our trip so far. 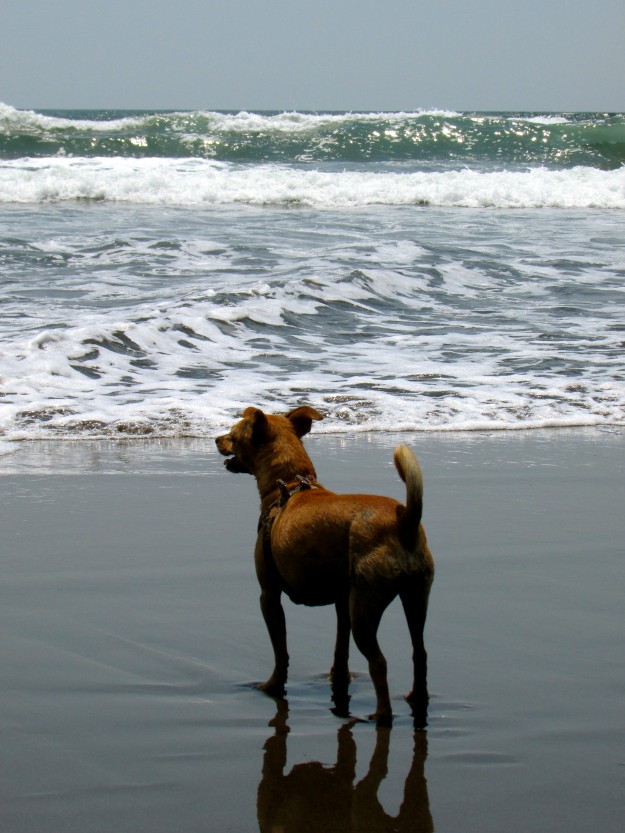 I couldn’t believe my luck when we pulled up and parked right next to the beach. I got to run and play in the sand every day when we were in El Salvador!

We woke up before the sun on Lake Atitlan, packed up the camper and the big white truck, and headed off for the border of El Salvador. I had heard My Family discussing the trip, so I knew it was going to be a long day. Victoria had plotted out the trip in detail, while Jason drank a ton of coffee, trying to make up for the fact that he was up all night with the stupid puppy. Seriously, this Maya dog was really making everything difficult. Since I don’t have thumbs I couldn’t ‘accidentally’ unhook her leash and leave her behind in San Pedro, so I reluctantly settled in on Victoria’s lap for the drive, making sure to give Maya the stink eye at every opportunity.

The roads were smooth, and Guatemala is so pretty that the trip to the border was a breeze. As soon as we got to the busy border, a nice man name Jorge rode up to us on his motorcycle, offering to help. My Family is usually wary of these ‘helpers’ at the border, because they’re normally very loud and pushy, and despite their job title not particularly helpful. I could smell that Jorge was different, and that afternoon he helped us out a lot. The border was confusing, and with Maya in tow everything was super slow and complicated. Thankfully we got through the process and into El Salvador without much of a problem.

The first thing I noticed here is that it was hot. Boy, was it ever HOT! All I could do was lay on my back on Victoria’s lap and pant. I do have to admit, Maya was pretty good in the truck. It was a super long travel day, and she never pooed or peed in the truck, and she didn’t even cry that much. Pretty good for a stupid baby. Finally, after eleven hours (!) of driving we reached our first destination in El Salvador, a hostel called Horizonte in a small town called El Zonte.

This is the view out our back door! Yaaay!

As soon as I got out of the truck I could smell a big difference between here and Guatemala. The salt in the air, the breeze, the low whoosh in the distance. Yep, we were back at the beach! My Family spoke with the nice man who runs the hostel, and he set us up with a covered camp spot right next to the sand! We were all exhausted, but that didn’t stop us from immediately having some runaround time. I don’t know about you, but I think the absolute best thing in the world is running around on the beach. I’ve even gotten a bit more used to the water. I don’t like the waves very much, but they’re pretty fun to chase and bite at. Saltwater’s pretty delicious too, even though My Family doesn’t like me drinking it. Maya got her first taste of the beach as well. She was born on Lake Atitlan, and everything so far has been totally new for her. Her first car ride, her first new country, and her first time stepping on sand! She’s pretty much scared of everything, but once she saw me running around she began to get the idea. 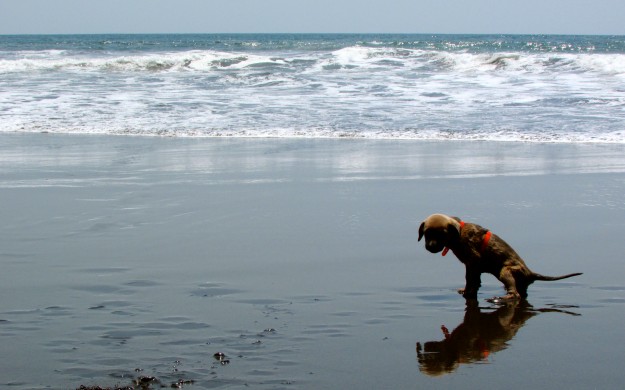 This is Maya peeing in the ocean. Victoria said it’s okay because lots of humans pee in the ocean as well.

We stayed in El Zonte for several more days. It was really pretty there. The hostel had two pools, the sand was at our doorstep, and delicious restaurants were all around us! It was full of surfers who all wanted to play with me and Maya, and every single one of them asked My Family if they surfed too.  They don’t but we sure love the beach!  The heat took some serious getting used to, however. I don’t think I’ve ever seen Jason sweat so much! Maya had an especially hard time getting acclimated. She really likes My Family, but she had a tough go of it those first few days in El Salvador. She just smelled sick. My Family took her to the vet twice because she had worms. I came too, and got a shot of my own (what did I do to deserve that?!). Maya also got blisters on her belly – pretty gross. She slept a lot, and My Family was pretty worried. I never make My Family worry like that. Luckily they were able to find the right medicine, and after a few days Maya was a lot happier. Of course, that just meant she spent all her time biting at me and trying to eat my food. Seriously, I don’t know about this baby thing. 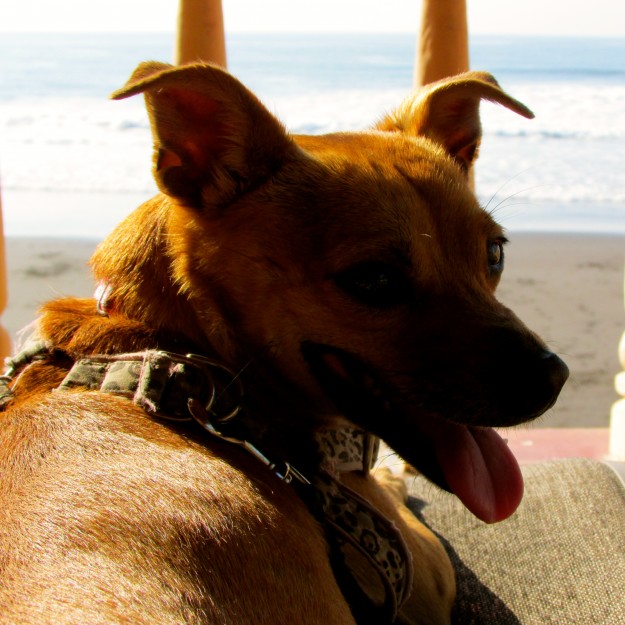 This is me relaxing on the roof deck. We spent a lot of time up here while My Family sat in hammocks, read books and forced me and Maya to go in the pool.

As the weekend came around, My Family packed everything up and we drove a few towns further into El Salvador, to a place called El Tunco. The travelers we had spoken to called El Tunco the ‘party town’, and I saw why right away. The air was jam packed with the smells of food and people, and music played day and night. After failing to find a hostel that would take us campers, we discovered Sol y Mar, which is basically a dusty parking lot, but it had a little market (called a tienda) and a restaurant, and was close to everything else in town. We also had some super cool neighbors, an Italian couple named Didi and Gaetano who are camping their way through Central America in a Volkswagon. They had just adopted a local dog of their own, a cute girl named Mancha. Maya and I spent a lot of time playing with Mancha, while our families hung out, sharing stories and that nasty human drink called beer. Maya seemed to like licking the bottles, but I’ve just got no taste for it. It makes humans do stupid things but Maya does stupid things without any help at all! 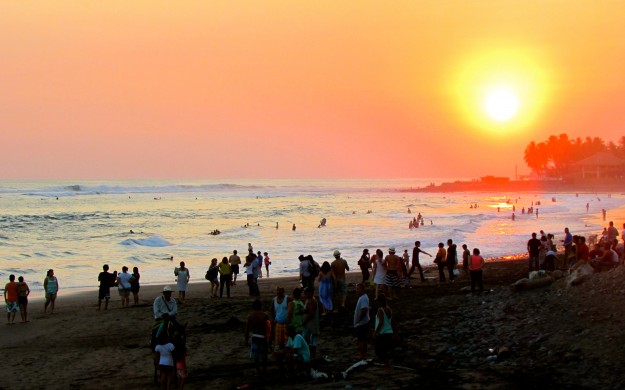 Playa El Tunco as seen from the wall. It was nice to look down on everyone for once!

We had a lot of fun in El Tunco, even though it was pretty busy. Maya and I walked with My Family basically everywhere, so I got to meet all sorts of cool people and taste some delicious food. The beach here is great for swimming and running around, packed with people from all over the world, other dogs and even some horses! We would watch the sunset, sitting on a stone wall overlooking the ocean, and then sit in outdoor cafes trying to cool off. We even met another family with a Chihuahua, a nice boy named Lucky but he wasn’t that into me. We probably would have stayed in El Tunco longer, but our campsite was a little complicated. We couldn’t park in the sun, so Jason had to keep lugging out the generator to keep everything working. That, coupled with the constant heat and so many people, made My Family decide to pack up and head back to Horizonte 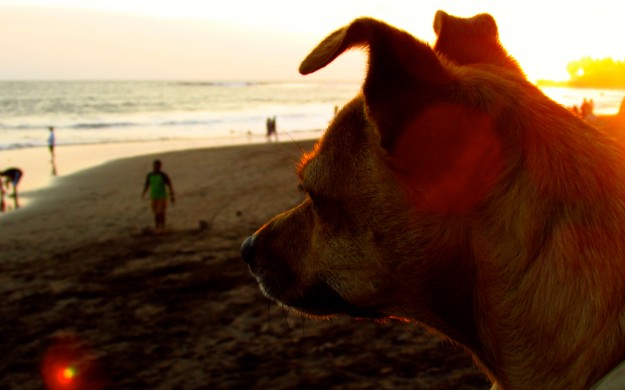 This is me taking it all in on the wall in Playa El Tunco.

We did just that, and spent another couple nights relaxing in the shade and peacefulness of El Zonte. Victoria would drag me and Maya under the outdoor shower from time to time or make us swim in the pool, trying to cool us off. I didn’t particularly like it, but I have to admit I felt better afterwards. We would relax at camp, cooking and staying out of the sun, go for walks on the beach, and eat delicious pizza at the hostel next door. There was even a movie night! They showed a movie called NORTH SHORE. It was pretty terrible, but everyone was laughing and cheering, so I guess it’s the sort of thing that humans like. Maya started feeling lots better; she’s even growing a bit now, and doesn’t look quite so scrawny. I finally let her play with me, although most of the time she just gets annoying and I have to knock her down to stop the constant nipping. It’s been a while, but I seriously don’t remember being that pesky as a baby. Victoria thinks Maya might be like this for the next year or so. Great.

Finally it was time to put El Zonte behind us. We packed back into the big truck and drove for a couple of hours to a place called Playa El Cuco. Back at the beach, down a super bumpy dirt road, we found a place to camp called Rio Mar. We were the only ones there, and it was absolutely beautiful! A long beach to ourselves, and delicious food at the locals’ restaurant next door. Everybody there loved me, and paid just as much attention to my cuteness as they did to Maya for once.

One of my favorite things about this trip is all the beaches where I get to leave the first paw prints. Playa El Cuco was empty except for me and My Family (and Maya).

We enjoyed watching the sunset, and I heard My Family talking about the long driving day were were going to tackle in the morning. Apparently, this was the sun setting on our time in El Salvador. All in all, it felt like a vacation. We had finally gotten back to the beach, which we hadn’t done in ages. We’d met some great people, spent a ton of time relaxing, ate delicious food, and helped the puppy get well. I guess that means we’re stuck with her. We went to sleep that night to the smell of burning garbage and some noisy roosters, while Jason fretted over the day to come. Apparently we were going to attempt something major: the crossing of two borders in one day! Was it going to work out? Would it be our longest driving day yet? Would we be okay in Honduras? I’m sure glad we had such a great, relaxing vacation in El Salvador. We’d need all of our energy (and a relaxed puppy), to navigate what was in store.

PS:  To see some of the photos My Family took during our time at the beach, click here!

7 thoughts on “Our El Salvadorian Vacation”