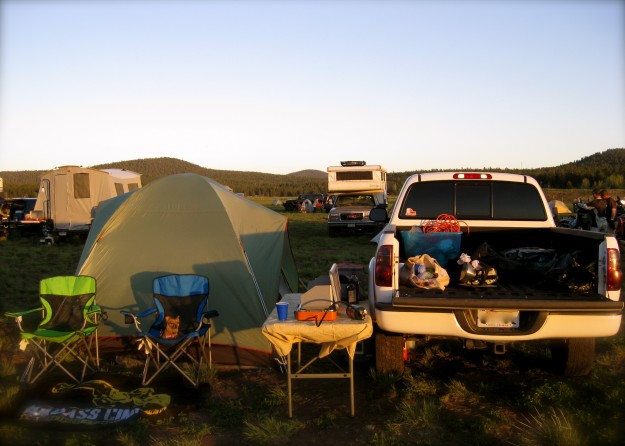 That’s me trying to relax at camp.

One day my Family made me get out from under the snuggly covers REALLY early in the morning. They put a bunch of stuff in the big truck and we hit the road. I didn’t even get to enjoy my standard two-hour lay about before actually getting out of bed. We drove for what felt like forever. When I did pop my head up by the window I saw lots of desert and not much else. Eventually there were mountains, and lots of trees, and a long, winding road that led us to some place my Family called ‘Overland Expo‘. They were pretty excited about it.

Overland Expo involved something they called ‘camping’. This seems to mean putting up a temporary house called a ‘tent’ in the middle of a hot, dusty, dirty, dried out lake filled with cow poo. Of course, I wasn’t complaining about the cow poo. When I was able to sneak some, it was fun to roll in. And delicious.

That was about it as far as fun was concerned. We got up with the sun and I spent the day being dragged from class to class, where other people said a lot of words that, honestly, sounded pretty boring to me. There weren’t many snacks, the water was warm, and the ground was covered with tiny pebbles that hurt to walk on. And yet they continued to drag me from place to place. I walked ALL DAY, more than any dog should ever have to. I mean, what happened to nap time? They even made me wait outside while they went into the Zane Grey Museum! I don’t know what that is, but Jason seemed pretty excited about it.

So many different kinds of trucks. My Family tells me we’re getting a pop-up, whatever that means

The campground was filled with all sorts of trucks like ours, many of which had those temporary housing structures built right on top of them. Apparently, we are getting something like that, but ours will ‘pop up’. I guess that will be our home? There were bigger homes on wheels too, loud things with something called a ‘generator’. I hope we don’t have to get anything like that. Jason wants a ‘winch’, but there was some concerns about weight, so I don’t really know what’s going to happen there. Worst of all, I didn’t see any comfy couches to speak of. 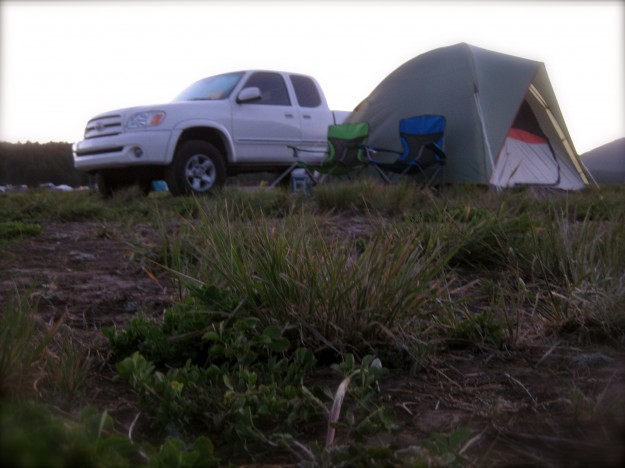 This is where we lived. It’s called camping.

It got really cold at night, but my Family seemed to want to stay up anyway, even when the wind was blowing so hard it actually knocked me over! I did start to like our tent, especially the puffy bed covered with blankets. And there were lots of friends to play with, of all shapes and sizes. There was a donkey that sang every morning to wake us up, and all sorts of horses, though they didn’t really want to play with me. And the other people there were so nice. Everyone gave me treats and bits of bacon, and all the kids wanted to pet me. Still, I was happy when we finally packed up to head home. Victoria and Jason seemed proud of me, and of how I did on our first camping adventure. But you know what? I didn’t see any beaches to lay on, or sand to dig in. If that was a preview of our Big Adventure, I’m glad it’s over for now.

PS: If you want to see the pictures that my Family took, they’re on Facebook.