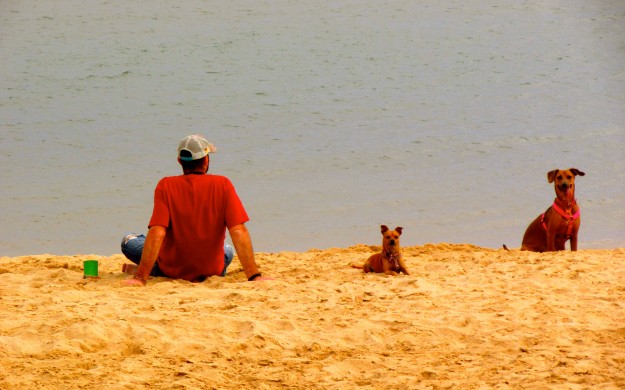 Finally back on the Baja, baby!

When last I wrote to you guys, I told you how excited I was to finally get back to the Baja peninsula. It had been a long time, and on our way south the Baja was nothing but fun. Well, clearly My Family was just as excited as I was, because the alarm went off before the sun was up. Maya groaned and turned over, dragging the covers back over her head, but I knew we wouldn’t have a long morning of lounging around ahead. I watched Victoria and Jason stumble around, swig coffee, and finally pack us away for another long journey. This was the day we were leaving mainland Mexico behind, and I didn’t want to miss a minute of it.

I leapt in the car as soon as Victoria opened the door, and even Maya seemed okay with getting back on the road. The RV parks of northern Mexico were full of nice people, but there wasn’t much action for us dogs. In fact, we hadn’t been off leash for a good long time, and I was hopeful that was about to change. However, we had to get there first. There were pit stops for water, gas and groceries, as well as two military checkpoints that slowed us down. The men in their weird, splotchy outfits were super nice to my family, but Maya didn’t like them at all. As soon as one would step towards Jason’s window, a growl would build from way deep down inside of her. It was pretty scary! Victoria was laughing, even as the military men would take two big steps back. I guess they can’t tell she doesn’t have any teeth.

It took quite some time to traverse the desert and finally loop back onto the peninsula, where we stopped for the night at a place called Kiki’s in the town of San Felipe. Practically the first thing we did when we got there was head directly for the beach, a beautiful, empty stretch of sand where Maya and I were allowed to roam free. Yep, brighter days were ahead of us. After a good long run, things got even better. We met a bunch of nice people from a land called Canada, which is on the other side of the United States. Jamie, Ian, Michelle and Rodney planned to stay on the Baja for several weeks, driving around in their VW buses. They were all super nice, and of course, loved me immediately. That first night was one of the best I’ve had in a long time. My Family stayed up late with our new friends, sharing stories and listening to music, and us dogs were around to hang out the whole time. I did my usual, bouncing from lap to lap, while Maya made sad faces at Michelle and Ian, hoping for some of their grilled chicken. I’ll bet you can guess which one of us got our wish that night. 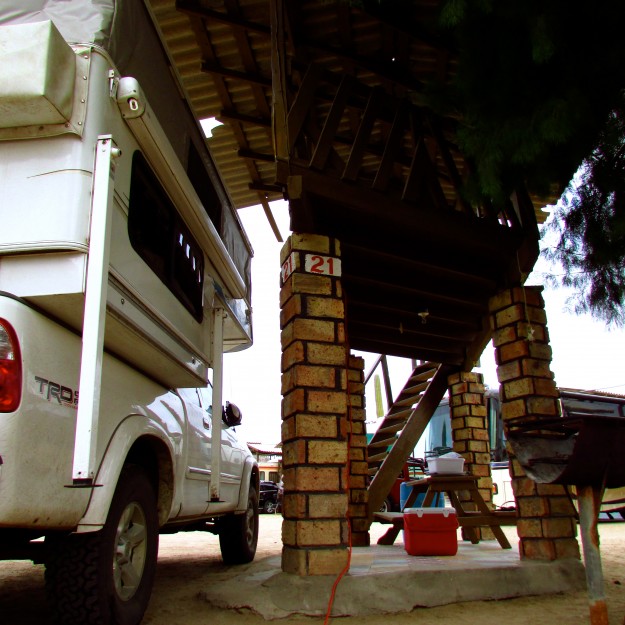 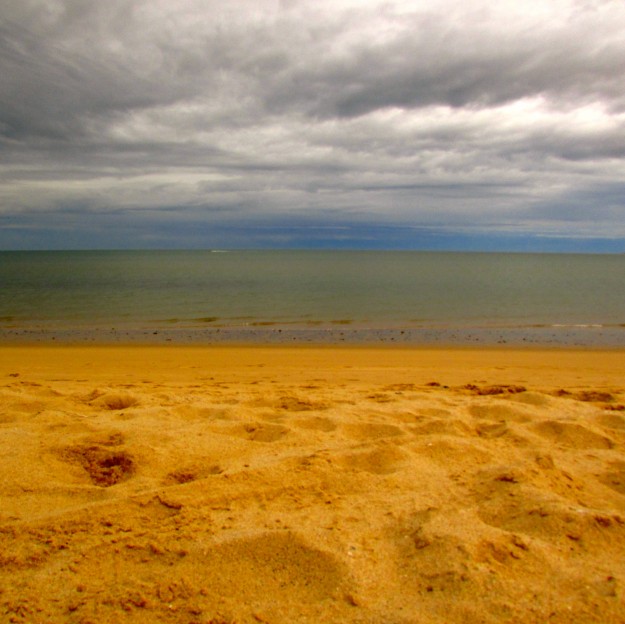 My Family had so much fun with our new friends that they decided to stay another day. Kiki’s was a nice park, with other dogs who were all super sweet and usually were allowed to roam around. There were big palapas for shade, and of course that great beach to scamper around on. There was even some sort of dead animal buried in the sand that us dogs kept nosing around at. It smelled delicious, but Jason wasn’t having any of it. Luckily, that second day we did get tastes of some even better food, and enjoyed another night hanging out with all the campers. I don’t know if it was the nice people, the beautiful beaches, or simply getting away from the gravel-filled RV parks, but we had an absolute blast. The next day Victoria and Jason got us packed up, and even though I was sorry to leave our new friends behind, I was super excited for the next stop in Baja.

Me hanging out with my new friends Jamie and Ian. 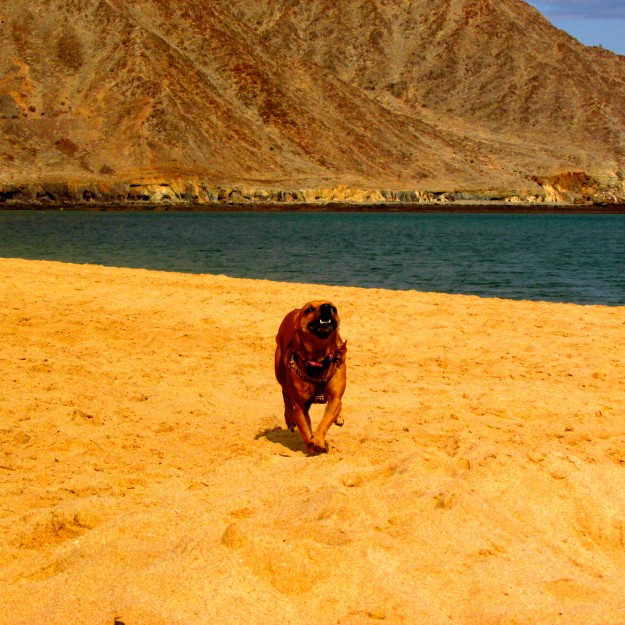 Just me, running on the beach. What dog could ask for more?

I thought we’d be up and out at dawn, as had been our habit lately, but Victoria and Jason were taking their time. Coffee and fresh tamales at camp, and then several stops in town for more gas and flea and tick medicine for Maya and I. All the stopping and starting was getting Maya seriously grumpy. She hates driving as it is, and the bumpy dirt roads weren’t making it any better for her. She was practically quaking by the time we left San Felipe behind, and Victoria and I had to calm her down while Jason focused on the road. The next drive was pretty quick, straight down the beautiful eastern coast of northern Baja. Nothing but white, sandy beaches as far as my eyes could see! We turned off the highway and jounced along a trail to reach a camp site on Gonzaga Bay. Wow, what a spot! First off, the lot that had palapas and bathrooms for the humans was super wide, and had almost no traffic on it at all. That meant our leashes were basically left in the car. Secondly, a steep, fun beach with birds to chase and plenty of sticks for Maya to gum up, and more new camp friends! Karly and Steve were also from Canada (What is up with that country? Is everyone from Canada awesome?!), and they had two big dogs that Maya was terrified of at first. One of them was also named Maya! How’s that for a coincidence? Their Maya was part wolf, and wasn’t scared of anything, so they’re pretty easy to tell apart. Tripp was their other dog, and he was super mellow. The humans cooked dinner while us dogs wandered the beach and hung out by our Big Truck. More stories, more music, and more tasty bites of human food. Yep, this Baja place is where it’s at! 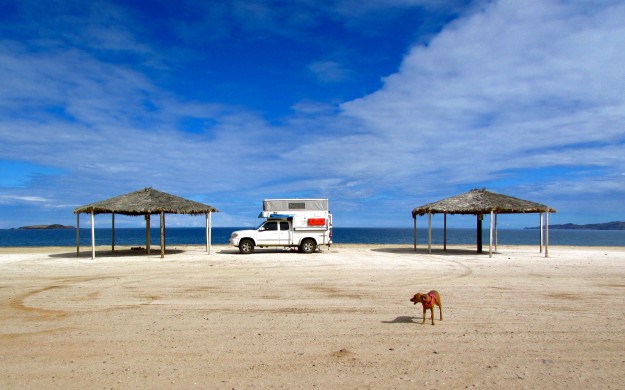 Another Baja day means tons of room to run. I heart the Baja! 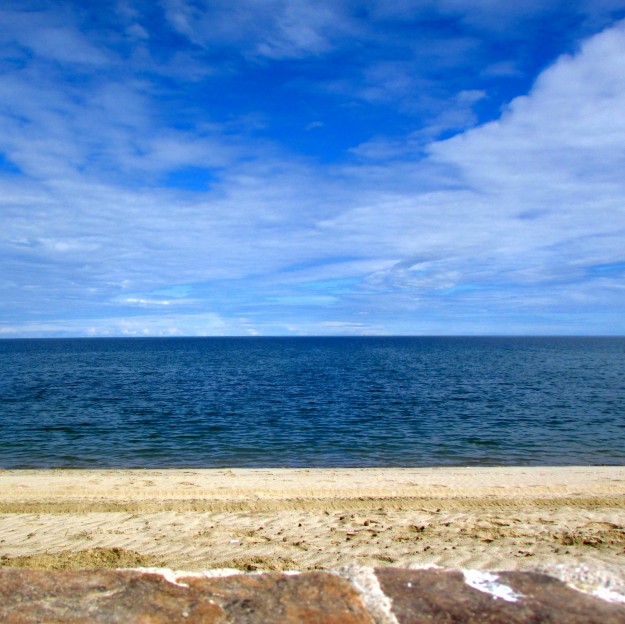 The next morning, Victoria and Jason woke up in time to watch the sun rise. They were pretty excited about it, while I was far more focused on catching another snooze before they whisked us off again. Yep, we only had one night on Gonzaga Bay. Jason’s work week was on the horizon, and even though this place was pretty special, we just couldn’t stay any longer. We said goodbye to all of our new friends, packed up and hit the road. 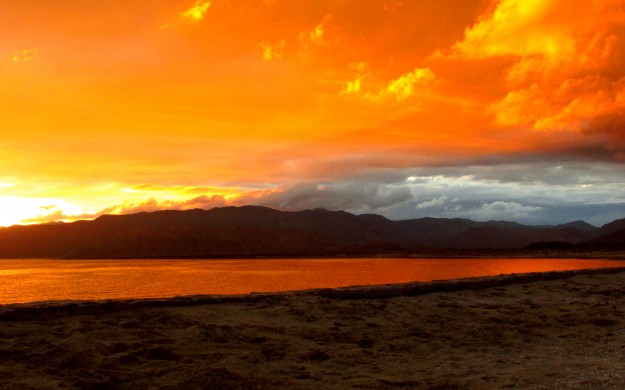 We were forced to wake up before the sun was up, but even I can appreciate how beautiful the sunrise is!

The drive to Bahia de Los Angeles was long and pretty intense, which is basically Maya’s nightmare. After a couple of miles driving south the pavement disappeared, and the rocky dirt road twisted into the desert. It was a super pretty drive, surrounded by giant boulders and cactus, but the road was crazy bouncy. Jason even had to stop to let some air out of the tires! Maya hung her head and tried to look as pathetic as possible, while I had my nose to the window, waiting for my next sniff of the ocean. Finally it came, as we left the desert behind and made it to the bay.

Bahia de Los Angeles is super pretty. My Family took a ton of pictures, and those will probably do a better job of describing it than I could. Our campsite was a place called La Gringa, and it was OUT THERE. We left the town behind, then bounced down a wide dirt road, then turned onto a narrow dirt road, then kept going on what basically looked like a random trail. When we arrived at the head of the bay, we found a shelly beach with just a couple of other campers, and a pretty sweet view. It wasn’t the best for running on with small paws, and the wind was blowing pretty hard, so we stuck to the camper and watched the sun fall under the water. It was nice and peaceful here, with no sound but that howling wind, and nothing to do but snuggle up with My Family. Pretty cool day. 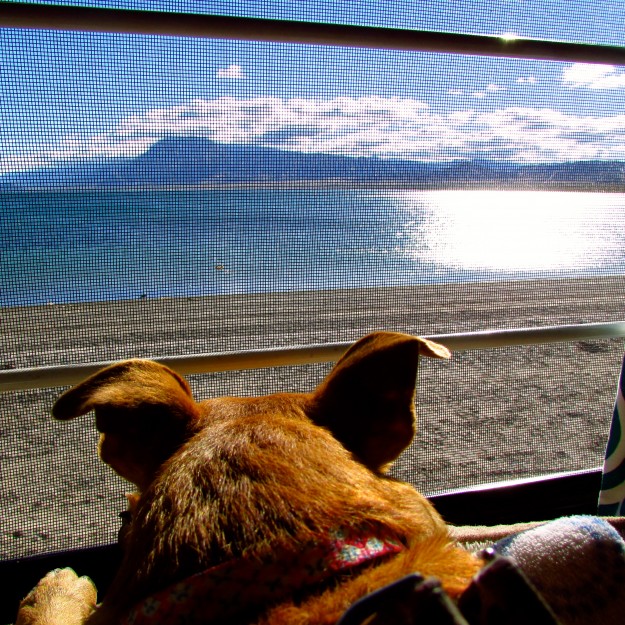 Me, waiting for the wind to die down so I didn’t get blown away into the bay!!

We packed up the camper fairly early in the morning to head back into town. Bahia de Los Angeles is a small, sleepy community, but Victoria had heard there were other campsites more in the middle of things where Jason could get his work done. We pulled into one place, a sweet camp site right on the beach called Guillermo’s, and talked to some nice Australian boys. Apparently, the internet there wasn’t working. Jason spoke to the owner, who was really cool, but she didn’t have a solution for him. So we drove to another hotel which also was supposed to have internet. They didn’t either. Jason started talking to more folks, and found out that the internet in this whole place simply came and went, blowing through as hard as the past day’s wind, and then disappearing just as fast. Jason was officially in trouble. He did find a little market that had internet, but it was barely good enough to check email. After more than a year of traveling through Mexico and Central America, Jason officially struck out on internet for the first time!

While he was off attempting to work, Victoria, Maya and I hung out on the beach at Guillermo’s. It was the perfect spot for a little doggie play session, away from the highway and all to ourselves. Maya and I ran ourselves silly and Victoria got in the action too, throwing sticks and begging Maya to bring them back. She did, sometimes. By the time Jason got back from his internet mission, we were all tuckered out, laying in the sun and catching a nap. 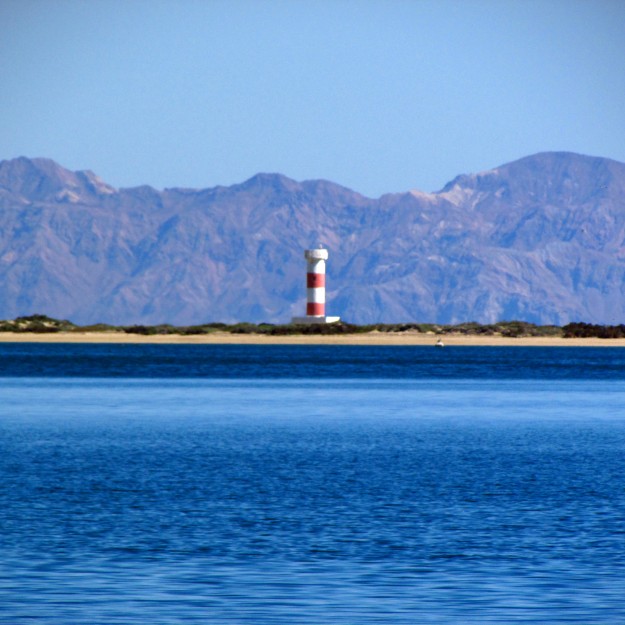 The super blue water in Bahia de LA. I was bummed we didn’t get to stay here another night…

As much as we would have loved to stay on this pretty beach, the whole no internet thing is a huge deal breaker for My Family when it’s time for Jason to work. I enjoyed having them to myself (well, myself and Maya, I guess) all weekend, but Jason had to get back to his mobile office, and it didn’t seem like that was going to happen in Bahia de Los Angeles. So with much regret, My Family packed us up once more and left this town behind. They weren’t entirely sure where we we going to go, but it looked like we had one more trip south ahead of us!

PS: To see some of the photos My Family took during our quick trip through Baja Norte, head over to Facebook.