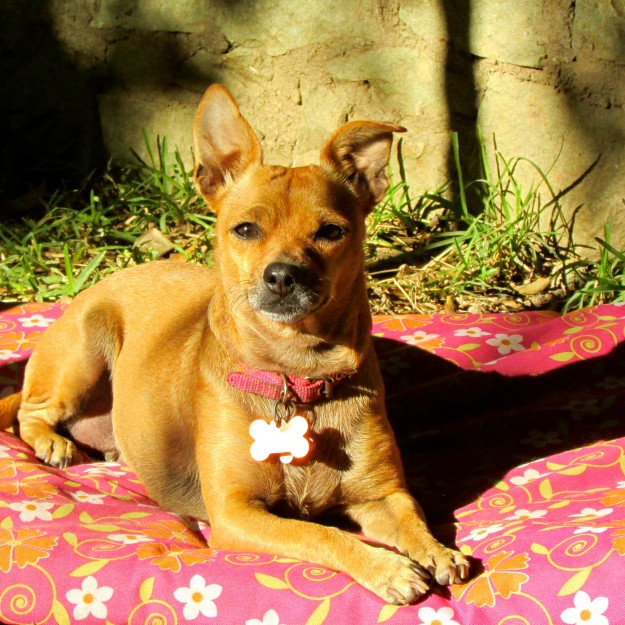 Phew! This holiday season has been something pretty special! I’ve been so busy hanging out with friends, family and other travelers (oh, yeah, and Maya too) that I haven’t had a chance to blog in a really long time! Okay, maybe I’ve gotten a little bit lazy, since we made it up into the mountains and the weather turned cold. But I’ve got a job to do, and I’m going to do it! So after much delay, here’s what happened when we left Playa Zipolite.

We packed up to leave the beach pretty early in the day, as My Family had been warned this was going to be a super long, super twisty drive. Although it was both of those things, it wasn’t so bad for us. Maya thankfully didn’t get carsick much at all, even with the curvy mountains Jason had to navigate. We didn’t get into Oaxaca until late afternoon, and following a couple of stops for groceries and odds and ends, we arrived at Overlander Oasis. 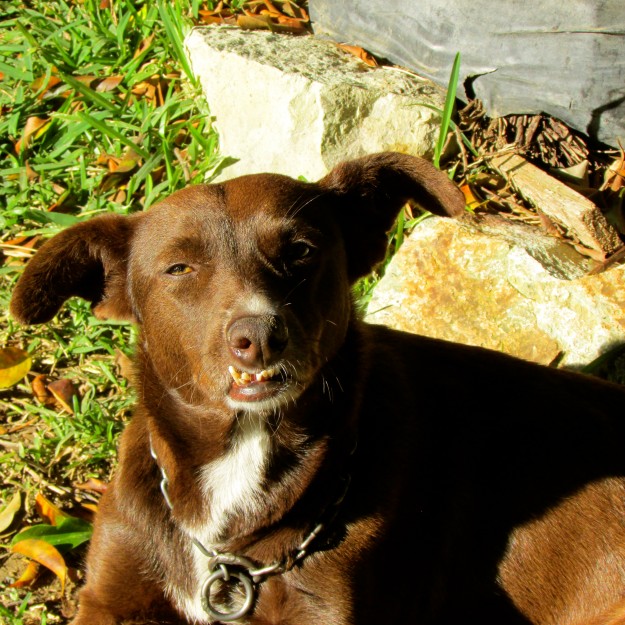 Snaggletooth. Some humans call her Morena.

We were immediately greeted by our friend Morena, and her human family Leanne and Calvin. It had been almost a full year since we last saw them, so I was super excited. Morena remembered me immediately, and of course deferred to my awesome presence right away. Maya, on the other hand, was another story. As you probably know by now, Maya is afraid of everything, and Morena was no exception. Morena’s a super nice dog, but we were coming into her territory, and she definitely made that known to Maya right away. It took a bit of time before they were able to get along, and more than a couple of incidents of terrified peeing on Maya’s part. I don’t really get it, but I suppose she’s still kind of a baby. I showed her that Morena was nice, and was more than happy to share her toys and lap time with her humans. I did end up having to get between them a couple of times. I mean, I’m allowed to terrorize Maya. She’s my sister. Other dogs have to get in line.

It was awesome to see our old friends, but there were plenty of new friends to meet as well. Overlander Oasis has become something of a destination for travelers like us, as Leanne and Calvin are super nice and have a really pretty campground. For dogs like us it’s amazing, because we get to explore off leash the entire time. Well, as long as we don’t venture into the cats’ territory; that’s when we get yelled at. Otherwise, our time at the OO is filled with running around, playing with toys, and meeting all sorts of wonderful people from all around the world. 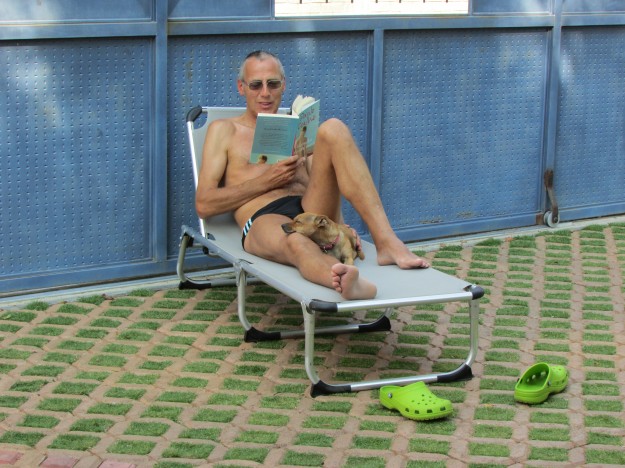 Me and Joe hanging out in the sun together.

First there was Joe, a nice man in a huge camper from Europe (that’s a whole other continent by the way, across a HUGE ocean). He gave us treats when we did tricks, and didn’t mind if I shared his sunny spot when he was laying out on his lounge chair. Then there was Jon and Alyssa, a couple from Seattle who were staying in the casita. They liked to cook delicious food and share stories about all of their traveling adventures. I also got to hang out with Robbie and Kristen, a couple from Canada who were in the middle of a long trip, planning to drive all the way to the bottom of South America. Robbie might be the tallest human I’ve ever met, and one of the nicest too. 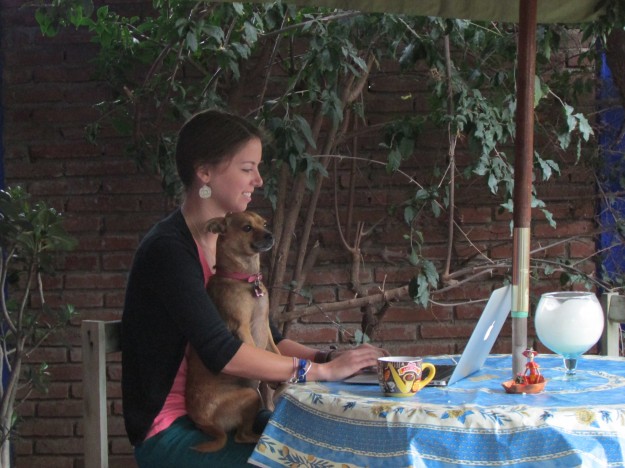 Me helping Alyssa with her video-editing. 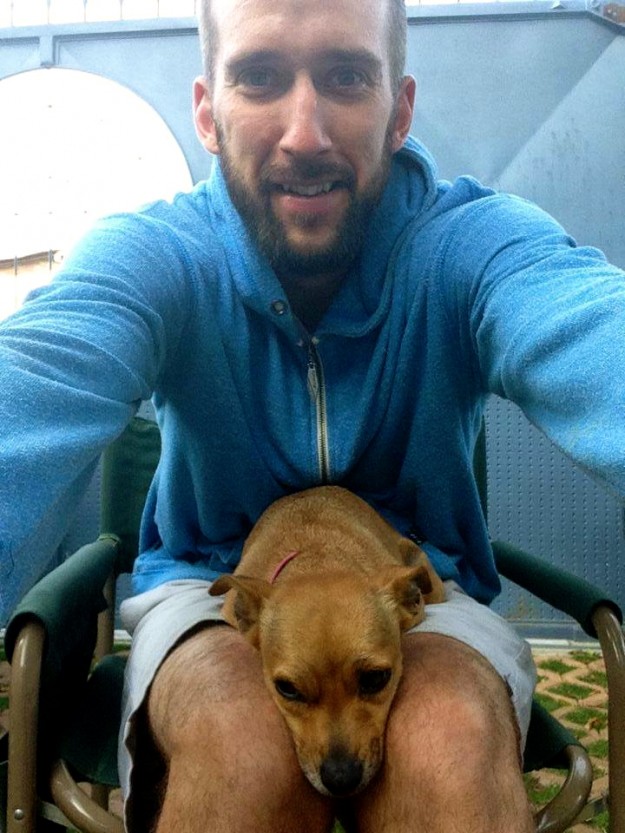 Because Robbie is the Tallest Human Ever his lap is extra large.

The campground continued to fill up with people, more travelers in one place than I think I’ve ever seen. We met Ryan and Kathi, a couple of tent campers who had left from Vancouver, Colin and Aeurlie, truck campers from Quebec, and Katrin, a super nice French lady in a Sprinter van. At this point, there were fourteen humans staying in the OO (including mine), and the days were packed with activity. Best of all? EVERYONE really loved me. They seemed to like Maya too, but she doesn’t get the quality lap time that I do. The whole group of humans went out in El Tule that night, and though I didn’t get to go with them, the delicious aroma of hamburgers followed them back home, so it must have been a good time. 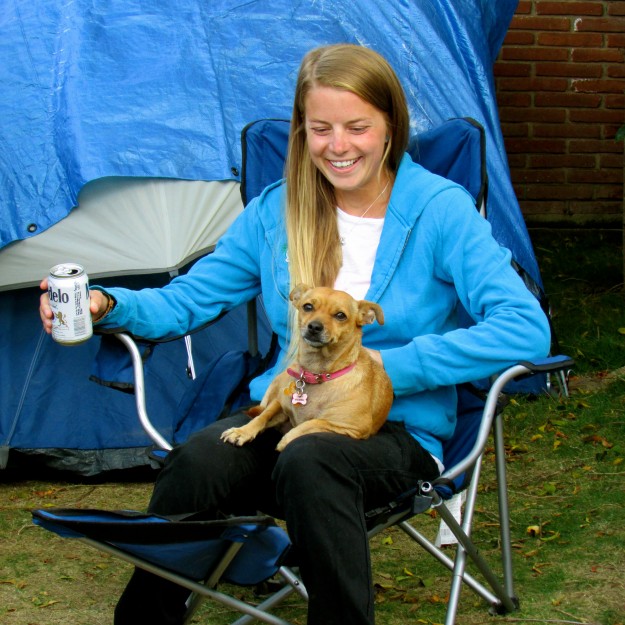 Kathi and me sharing a beer. Overlanders like beer. A lot.

The next day was Dia de los Muertos in Mexico. That means ‘Day of the Dead’, and although it sounds kind of scary, it’s actually a super fun holiday. I thought it was their version of Halloween, and although it does share some of the same characteristics, it seems to be much deeper than that. Leanne set up an altar on the campground, and placed pictures of her older relatives on it. Victoria shared her photo of her grandmother too. I guess it’s a holiday where you celebrate your favorite older relatives that aren’t around any more. The humans light candles, drink mezcal, play music and tell tales. It’s pretty cool. All the humans went into Oaxaca for the night to celebrate the holiday, and we didn’t get to go. So while they were off, probably having an incredible time, I was stuck in the camper, watching Maya cringe every time a firework blasted off. Yep, good times. I know I have it good, but sometimes I wish I was a human so I could do some of these things. 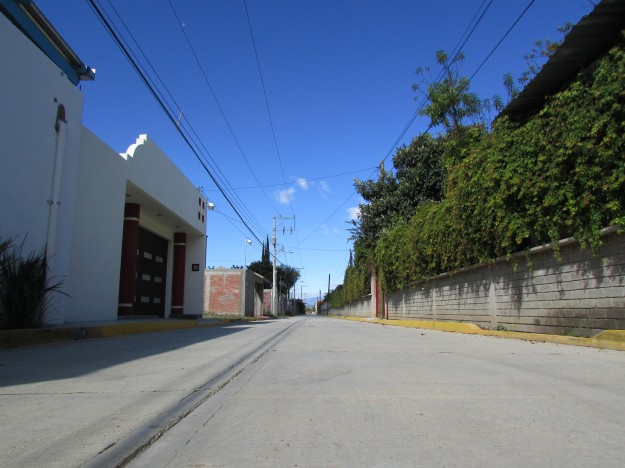 Our street in El Tule. Not many cars so it’s perfect for running around on.

The next morning My Family was up early packing two backpacks full of gear. This was super confusing. We just got here, and by the look of things Jason wasn’t packing up the camper. What’s the deal? Soon I figured it out, and my tail wilted: Jason was going on a trip, WITHOUT US! He smelled nervous, and Vic was certainly a bit sad. They drove off with Leanne, and then when they came back without Jason, Maya was super confused. I knew the deal, because Jason’s had to go on trips before. I’ve even been left in a doggie hotel while my whole Family went away somewhere. For Maya this was all new territory. In fact, I don’t think she’s been away from Jason for more than three or four hours in her entire life. Victoria had a bunch of fun that afternoon, meeting another super nice couple that arrived named Heather and Dan, and checking out the town cemetery for the end of Dia de los Muertos. For Maya, that night was a disaster. She stayed up literally until sunrise, crying and staring at the door. 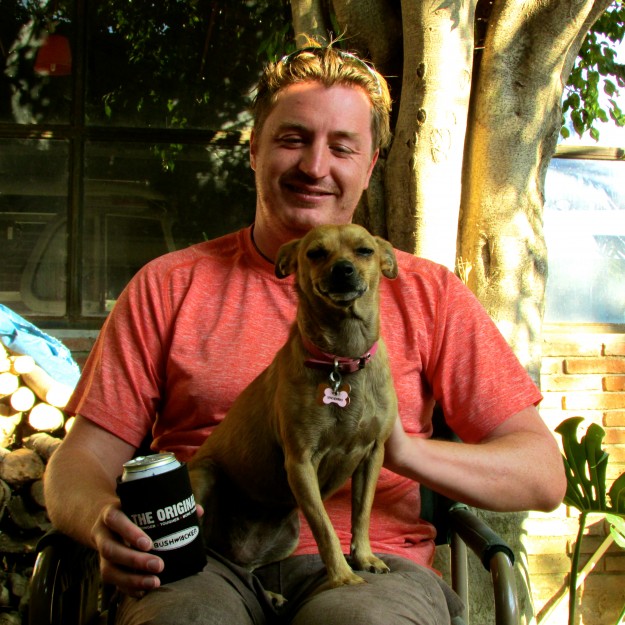 Me and Lord Dan. Don’t tell anyone but he was my favorite out of all the campers at the O.O.

I don’t think any of us slept. I tried to console her, assuring her that he would be back, but she just didn’t understand it. It’s hard to be a puppy sometimes.

The next day, some of the travelers left for southern destinations, but a couple more arrived, nice people named Brendan and Bridget. I got more attention, and Maya and Morena started to really get along. Yet I could tell she was still panicked about Jason’s disappearance. Luckily, the time while he was gone passed pretty quickly. Maya still panicked at night (even chomping on a pile of receipts in the camper), but started calming down and sleeping more. Victoria hung out with the other campers, one of which had a dog that helped us turn the OO into a canine party palace. A vet came by and treated Maya, telling Victoria that Maya would never get teeth because she didn’t get enough nutrition when she was a little baby. How sad is that? I ran around, stealing toys from Morena while Victoria and Leanne bought fabric to make a new garland for the camper. The days were warm and sunny, the nights late and filled with human games and laughter. Other than the fact that Jason wasn’t there and one time Maya peed an ocean inside the camper, life was pretty good. 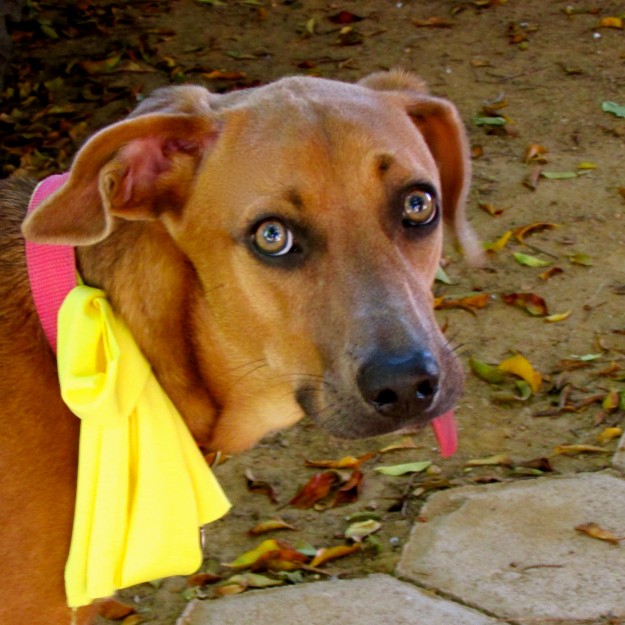 One morning, the day I knew would come finally arrived, as Jason strolled back into the campground! He looked super tired, but really happy to see us. The whole family went crazy. Maya and I slathered Jason with kisses before he could even get to Victoria. Maya’s tail was wagging so hard I wondered if it would fall off. He was gone for ten human days, which of course felt like MONTHS to Maya and I. Jason dropped off his gear and we all hung out. Apparently, Jason had to go back to Los Angeles for work, so that’s why he left us behind. He also got to see a bunch of his friends, so we all looked at pictures and heard the latest from our old home in Venice Beach. Maya leapt up into his lap and refused to move for hours, even while Jason tried to meet all the new campers he had missed while back in the United States.

We spent another week at Overlander Oasis, and now the My Family was back together it was absolutely perfect. Maya and Morena were pals, and the days were filled with exploring El Tule, watching the humans cook delicious food, and putting on our best cute faces to make sure we got tastes of everything. There was pizza, chilaquiles, parrillada (basically the best thing ever, a huge meal with every kind of meat you could imagine), tacos, tamales and one of my favorites – grilled cheese sandwiches. Although Maya and I spent almost the entire time within the walls of Overlander Oasis, we were totally content. Good food and nice people who love us? What more could you ask for?

Since I’ve already been to a lot of the places Heather and Dan are going to, I was a big help in helping them plan their next stop.

We were all ready to pack up and go when My Family suffered a mini disaster – Victoria fell out of the camper and hurt her ankle! Everyone came running and found her in a lot of pain. I licked her face as hard and fast as I could, and though it did make her smile, it didn’t seem to help her ankle much. Luckily our new friend Heather works in a human hospital and knew what to do. We stayed for a couple more days so Victoria could get back on two feet, but finally it was time to pack up the big camper and head north. Our next stop would be San Miguel de Allende, one of our favorite cities on the entire trip, and a meeting with my friends Shae and Olivia (and their humans Hani and Sarah), who we hadn’t seen since Costa Rica. I was sad to go, but excited to see what was in store next. My Family shared hugs with Calvin, Leanne and the remaining campers, and promised to stay in touch with all of them. Morena ran around as we pulled out of the campground, clearly sad to see us go. I hope she knows how thankful we were that she shared her home with us!

PS: To see some of the photos My Family took while we were in El Tule, head on over to our Facebook page!