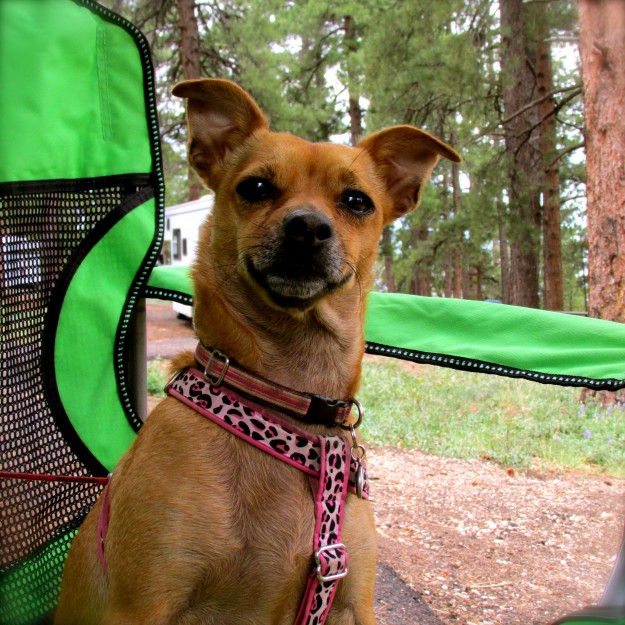 5AM. My Family leaps out of bed. You have to understand, this is not at all normal. The alarm blared, and instead of Jason hitting snooze and Victoria tucking me back in I was forced to get up. A quick walk on freshly watered grass, and suddenly we were getting into that big white truck again. The mountain of boxes and bags that were taking up all of my carpet space in the living room were packed with us, and off we went.

12:32AM. (The NEXT day!) Apparently we were in a town called Colorado. I’ve never been in a car for that long in my entire life. The pressure in my ears told me that home, with the sunny spots, the sand to run in, my two beds and all of my toys was really far away. And my ears kinda hurt. I got to ride on this wheelie thing that My Family carried all our stuff on. They thought it was pretty funny, but I liked being rolled around, even though I fell off once. We stayed in a hotel called Comfort Inn. Victoria said it was “just okay” but I loved it. Our room had two giant beds to jump on, the whole room was carpeted and there was a special area in the backyard for dogs to run around in.

The next morning, at a place called Phoenix Pop-Up, I found out where all our things (and us, apparently) were going to live. This place was really hot, and me and my new friend Shadow could only really lay on the driveway, making our best sad eyes. Then My Family got really excited when a huge box with windows was put on the back of the big white truck. So get this, the box has a couch and even a place for my bowls. It’s going to be our home soon. 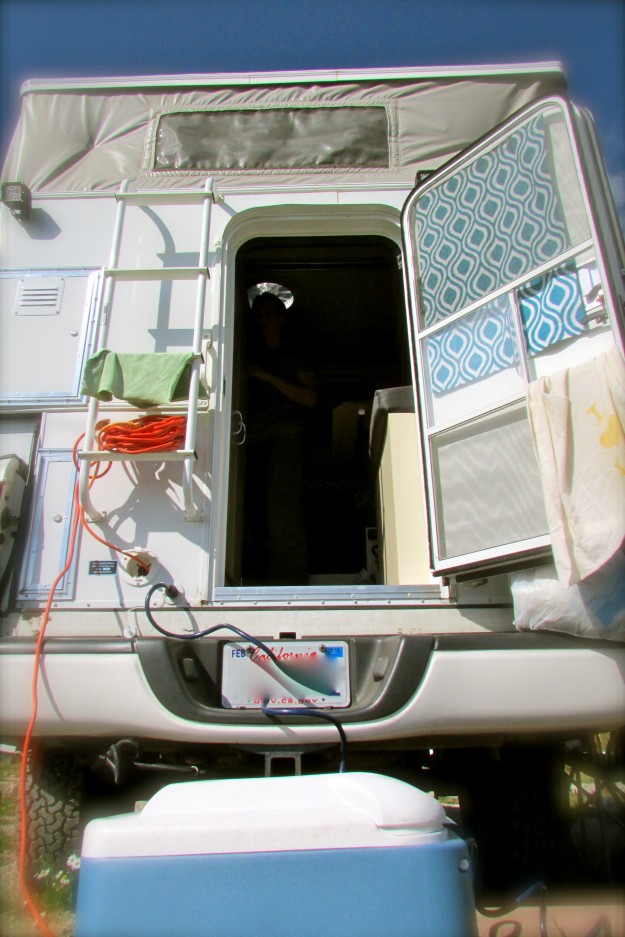 The comfy box, popped up.

Victoria and Jason were pretty excited to spend the night in this comfy box. They drove us to a campsite, which was something like what we did at Expo. But this was way cooler. We were in a forest by a lake, with all sorts of bugs to hunt and other dogs to check out. The air felt different here, cleaner maybe. It was pretty hot during the day, and I smelled so many new things. When the sun went away I started shivering, so Victoria made me put on my pink hoodie (which I secretly love, but don’t tell anyone!). That night I discovered there’s also a bed in the comfy box. I had to be lifted into it, but it’s even better than our bed in the blue house. I think I like this so far. 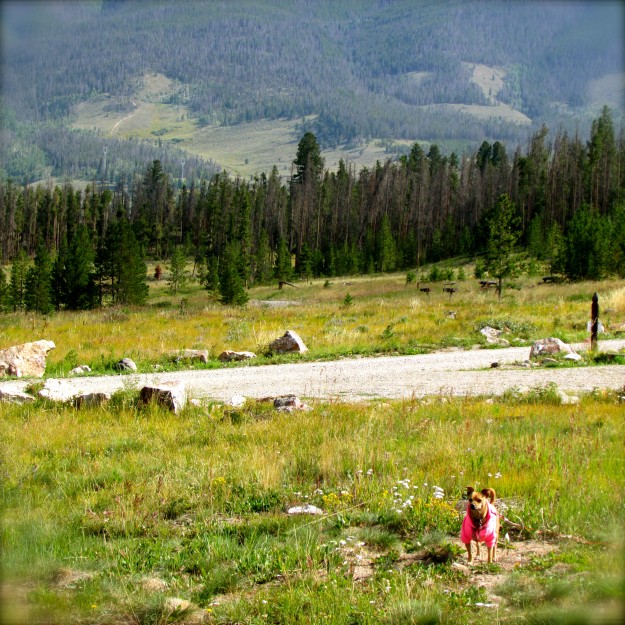 Me, at our first campsite, Lowry Campground

We got up pretty early the next morning and packed up. The big box is staying with us. It’s called a “pop-up camper,” and it carries all of our stuff. My Family says this means we can go anywhere we want to now, but we just got back into the big white truck and drove for hours and hours. When we stopped to go for a walk, I heard Victoria say this place was called Utah. It was dry, red and dusty, but really beautiful. We didn’t stay long, and I ended up back in the big white truck for a few more hours. I realized I could drink water out of my bowl and bury my food in my blanket if I got Victoria to let me sit under her legs. After that I never saw my travel bed in the back seat again. 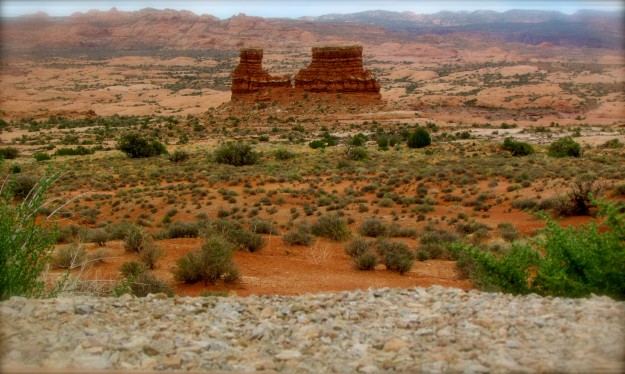 When we finally stopped, it was like a whole other world! Nothing but big, red, smooth rocks everywhere. It was so dry but the ground was lovely and warm under my paws. My Family called it Arches, in the town of Moab Utah. I didn’t get to see any arches up close, because all the signs said that dogs were not allowed on the trails.

Lots of red rock in Arches 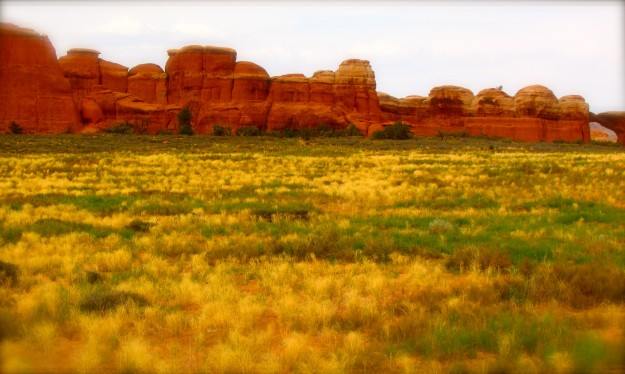 Our campsite was maybe the coolest place ever. Giant red rocks everywhere, and a field of bushes surrounded in red dust. This wasn’t sand; it didn’t squish through my paws, so it wasn’t great to run through. It was still pretty fun to lay on… until I realized that I could jump into the mushy chairs that fold up or, if My Family helped me, I could even lay on the super comfy couch inside the camper. That was definitely the place to be once Jason started cooking up sausages. They smelled so good that I didn’t even mind when that thing on the wall with the red blinking light started beeping over and over again. Victoria waved a towel at it, but Jason decided that it was bad, and it had to sit on the table without a battery until after dinner. It didn’t beep again, and I got to have some sausage. Whatever Arches is, it’s awesome. 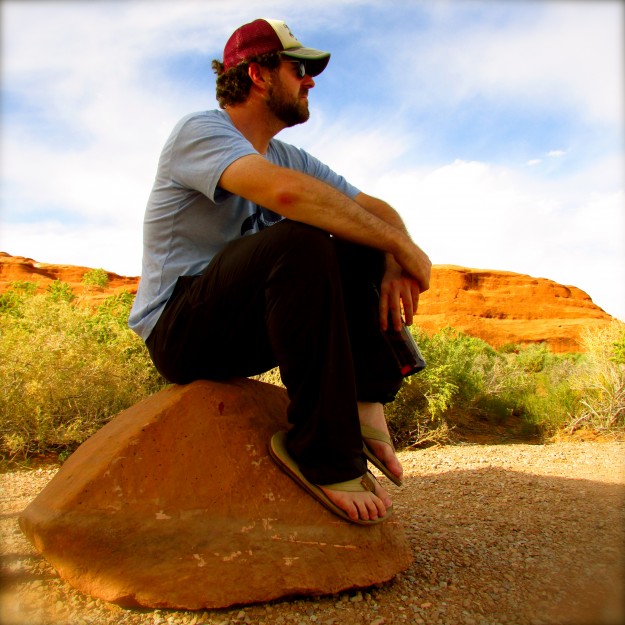 Jason liked our campsite too… especially the cold beer. 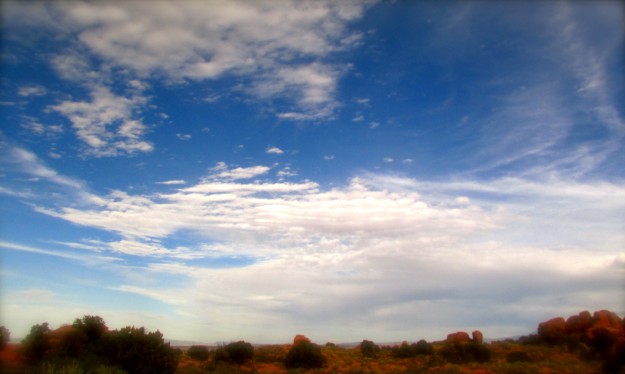 The sky was big in Arches.

The next day we got back into the big white truck and kept driving. They kept talking about The Grand Canyon. We stayed the night in Jacob Lake, but I didn’t see any lakes. I did see plenty of water because it was pouring with rain almost the whole time. I don’t like when it rains because my feet get wet but Victoria made me put on my raincoat and go for walks; she even made me stand outside in the rain while they got burgers from a restaurant for dinner. I didn’t like this town so much, but the next morning the rain had stopped and before we got back in the big white truck I got to run around in the forest. It wasn’t that bad after all.

I didn’t know what The Grand Canyon, or even what a Not-Grand Canyon was until I saw it, and when I did finally see it I almost ran the other way. I don’t know if you’ve heard about this place, but The Grand Canyon is the biggest hole I’ve ever seen. Giant. Huge. I can’t even imagine how many dogs it would take to dig a hole that deep. Jason was reading a sign and going on and on about ecology and erosion, but there was a nice Lady sitting near us who really liked me so I basically tuned it all out. 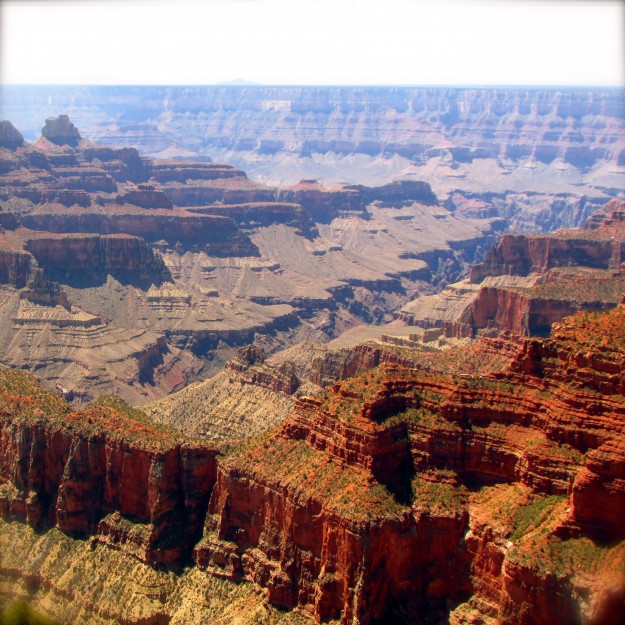 We got to a new campsite, which was right near the edge of The Grand Canyon. Don’t worry, we were totally safe. The big white truck was parked on a driveway, and our whole setup was pretty cool. I got to hang out with My Family the whole time, sitting in the mushy chairs, laying on blankets, going for walks and making new friends. The trees were so big that I couldn’t even see the tops, no matter how hard I squinted. There were plenty of new smells and strange noises, and I got to lie in the dirt for as long as I wanted to. Lots of people we didn’t know kept stopping by to talk to Jason about our new home, which was fun because I like making new friends. 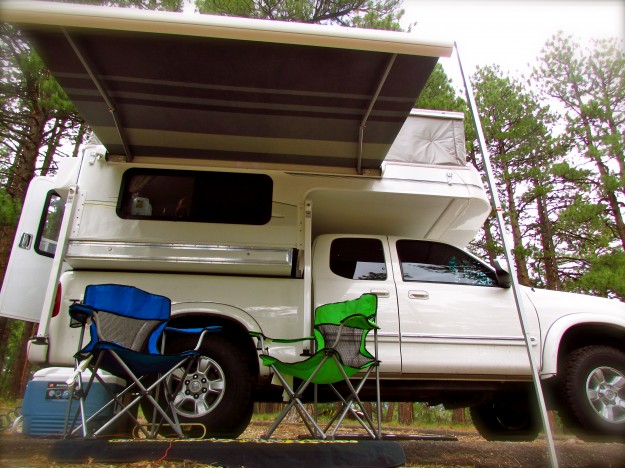 Later Jason and Victoria hung big fabric-y ropey things between some of the trees, and before I knew it we were laying in them. They’re called “hammocks” and if you don’t have one you should get one. It was like being on a lap and tucked under the covers all at the same time. I think I’m starting to understand why My Family jumped out of bed so early the other day. 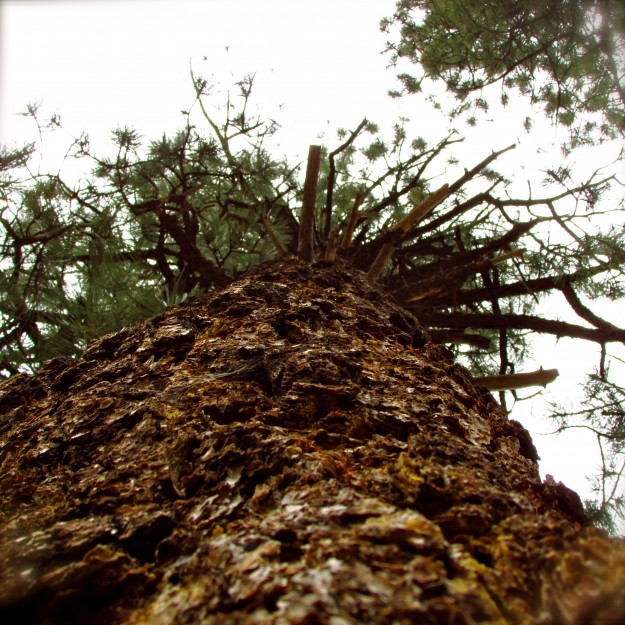 After a yummy dinner and a campfire we got back in the camper, and when the sun came up again we packed up and hit the road. Before we had driven very far, Victoria asked Jason to pull the truck over to look at some animals. I actually smelled them way before My Family even noticed them, but I wasn’t too bothered. They’re called Bison and they are sort of like the biggest dogs you’ve ever seen, but they have giant heads and aren’t that interested in playing. Jason took some pictures and we drove off, leaving The Grand Canyon behind.

Haha, look at his giant head!

Another long drive and we were in the town of Sedona Arizona. More red rocks, even bigger than what we saw before. I thought our next stop would be another campsite, but before I knew it we were walking into a place that smelled like only one thing: the vet’s office. I didn’t know why we were there, but it couldn’t be good. Suddenly the nurse was taking me away, and My Family was walking out the door! Believe me, this was not what I had in mind for the day! Where were they going? Were they coming back? Would I ever see my family again?!

Luckily, they picked me up a few hours later, after the vet did some weird stuff to my bum. I guess I hadn’t really noticed, but Victoria had been worried about me for a couple of days, but once she found out I could take some medicine and this thing called “giardia” would go away, she calmed right down. My Family let me dash outside and away from the vet’s office, and a little while later we were at another campsite. This one had huge campers, way bigger than ours. My Family was excited because we had air conditioning in the camper, thanks to something called an ‘electrical hookup’. I have to say, it is nice to have somewhere cool to go sometimes. We went on a walk, and Victoria made me jump into a river. I don’t really get that whole jump-around-in-the-water thing. It was cool on my tummy, but I much preferred getting wrapped up in a blanket and snuggling on the couch after that. Another yummy meal and it was time for bed. 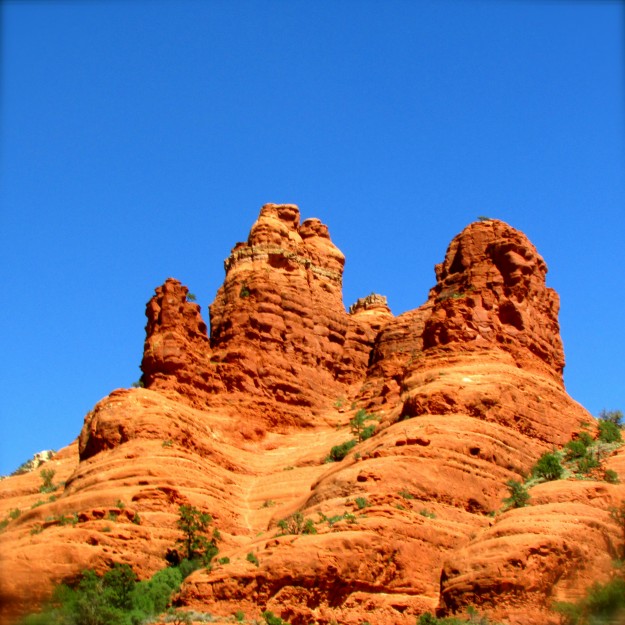 The next day My Family seemed sad about going home. That’s just crazy. Our home is awesome. I think maybe they were sad because they knew we had to drive through a town called The Desert. I’ve never been somewhere so hot! Many, many, many hours in the truck and we were finally home. I was happy to have my beds back, and the rest of my toys. Now the camper has come off the big white truck and it’s sitting in the driveway. I love our home, but on the camping trip I got to spend all day and night with My Family… I’m not sure which one I like better. Maybe that was The Big Adventure Victoria and Jason are always talking about?

PS: If you want to see what My Family thought about our trip to pick up the comfy box, check our their photos on Facebook.

2 thoughts on “Home is where the couch is”