Me, taking in the view of Guanajuato

My Family and I had such a great time in Sayulita that I was wondering what we could do to top it. We had spent days with our friends, run on the beach, eaten delicious food and chased giant bugs and lizards. What could be better? Well, it was clearly going to take some time to find out. We got back on the road and started a long, long trip to our next destination, Lake Chapala. According to Victoria, Lake (or Lago, en espanol) Chapala is the largest natural lake in Mexico. That sounded pretty cool but we had a lot of ground to cover before I could check it out.

We spent the whole rest of the morning and into the afternoon on a big highway, going up and down huge hills. It was a pretty day and the road wasn’t too bumpy, so I was more than content to snuggle up on Victoria’s lap and let the miles roll by. There were an awful lot of tolls, though. Jason was grumbling about the expense, while Victoria argued that these roads were faster and safer. I dunno, I just really didn’t like all the little bumps before each toll. One cool thing, however, was that one of the tolls had nice grassy spots for peeing on, good bathrooms for My Family, and even a taco stand with delicious food!

As we got closer to our destination, the sky got really cloudy. There were a few drips of rain, which made Victoria nervous. I guess the work Jason had done at Los Barilles to seal up the roof hadn’t quite worked, and there was still a little leak inside. Well, things got worse in a hurry. The sky opened up, and it started pouring! Now, I don’t know how things are where you live, but back in Venice we didn’t see rain like that very often. It was coming down so hard that Jason almost couldn’t see through the windshield. He noticed that the car in front of us decided to pull over under a bridge, but we were almost to the lake and Jason wanted to keep going. I think he felt a little differently once the hail started. I don’t think I’ve ever seen anything like it! Huge chunks of ice bouncing off the windshield, hitting on the hood of the big truck and smashing into the ground all around us, while the rain continued to fall. This drive wasn’t going so well.

We managed to find our turnoff and drove down a cobblestone road as the rain let up. Ahead were the gates for Roca Azul, which was right at the edge of Lake Chapala. This place was pretty neat. There were cool houses around the Park, which seemed more like a summer camp than any RV park I had seen so far. The grounds were huge, with several buildings, a soccer field, and even a huge playground for kids. There were tons of larger RVs, what Victoria calls “Big Rigs”, but nothing like our little camper. We found a nice spot under some trees and parked. 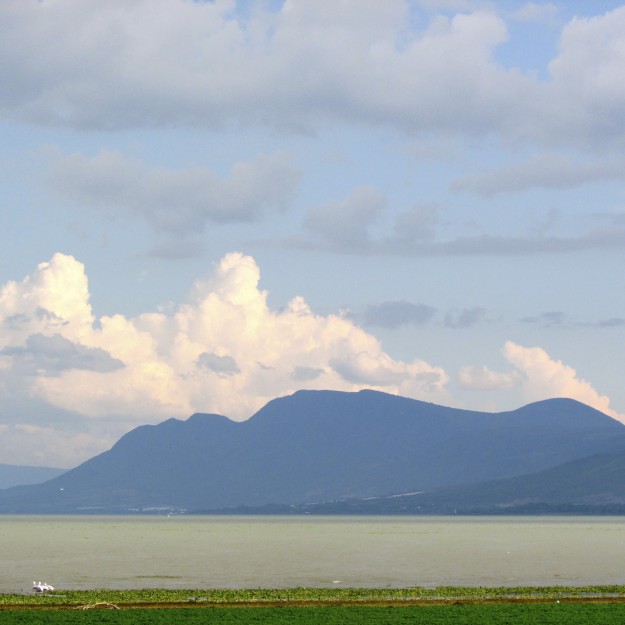 Lake Chapala was certainly pretty. But there were lots and lots of bugs and since I had scratched up the screen Jason ended up closing the door, which I know he wasn’t happy about. Okay, I messed up! Sheesh! That night we were all pretty tired, so Victoria and Jason made a simple dinner and after the moon rose fat and orange over the lake, we tucked in for the night. 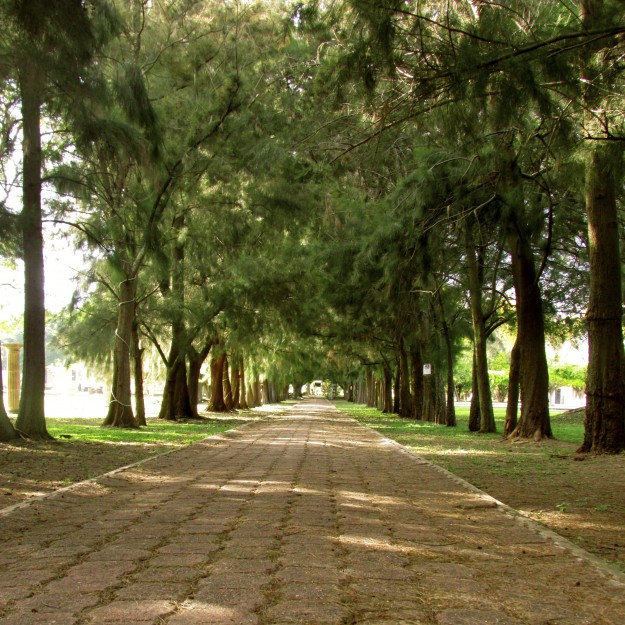 There were lots of beautiful trees in the campground, this is where we walked to get back and forth to the good internet. 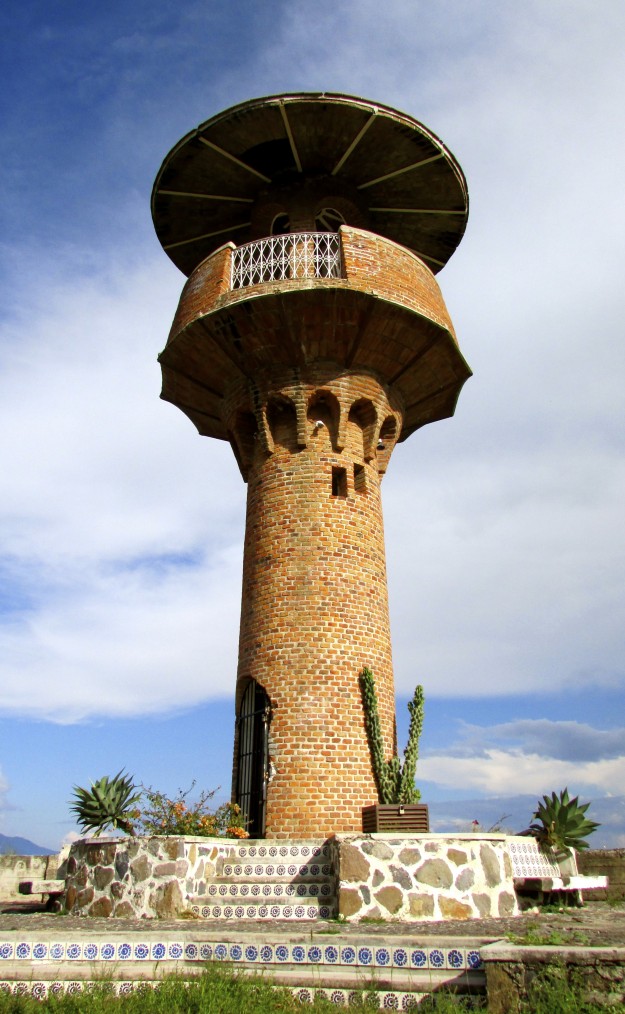 Vic is afraid of heights so I had to stay on the ground to look after her.

The next day Jason had to work, but the internet wasn’t working so well in our camper. So he took me over to the office while Victoria stayed behind to clean up. I didn’t mind hanging out while Jason worked, as we got to sit on a cool stone bench in a really pretty field. When he took a break we got to run around on the soccer field, which was a lot of fun too. Victoria came over to hang out with us, and she and Jason started talking about us being behind schedule on the trip. Apparently they thought we were only going to spend six weeks in Mexico, and now it was looking like it was going to take a lot longer. I don’t really know where we are on this adventure, but this sure is a big country. After the work day Victoria and Jason took me for a walk around the RV park. There was an awesome lighthouse out by the lake, which looked over a huge green field covered with birds. Jason went all the way up to the top of the lighthouse, but Victoria was too scared to go up that high so I stayed with her. We walked further and saw a beautiful swimming pool, but it was a little too cold to go in. We went through the playground, and Victoria made me get on all the rides with her. I don’t know, I think I prefer keeping my feet on the ground. Jason said he thought it was a little bit creepy, all of these toys for kids and no kids around. In fact, the whole campground was very quiet. We saw almost no one, and as the sun disappeared I could tell it was making Jason a bit uncomfortable. I didn’t mind so much; I like the quiet from time to time. 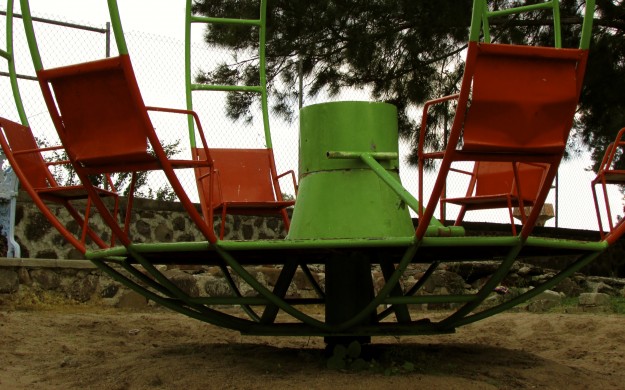 One of the rides My Family forced me to go on. 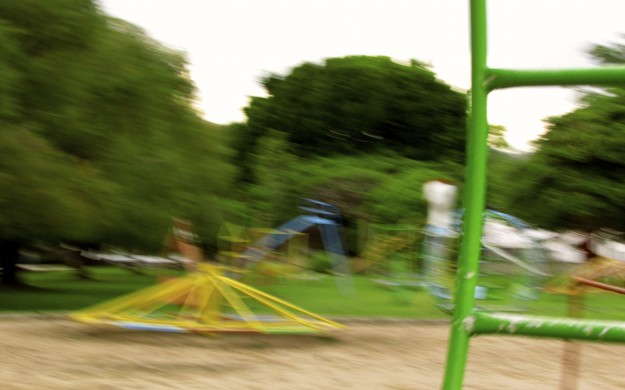 Can anyone tell me why this is supposed to be fun?

In the morning we got packed up and drove to a place that couldn’t be more opposite of Lake Chapala: the city of Guanajuato. Guanajuato looked really old, with narrow stone streets and tall stone buildings. It was also REALLY confusing to drive. I could tell Victoria and Jason were getting a bit frustrated, and we had to pull over once to figure out where we were going. Finally they found the right street, and we reached the Morrill Trailer Park. 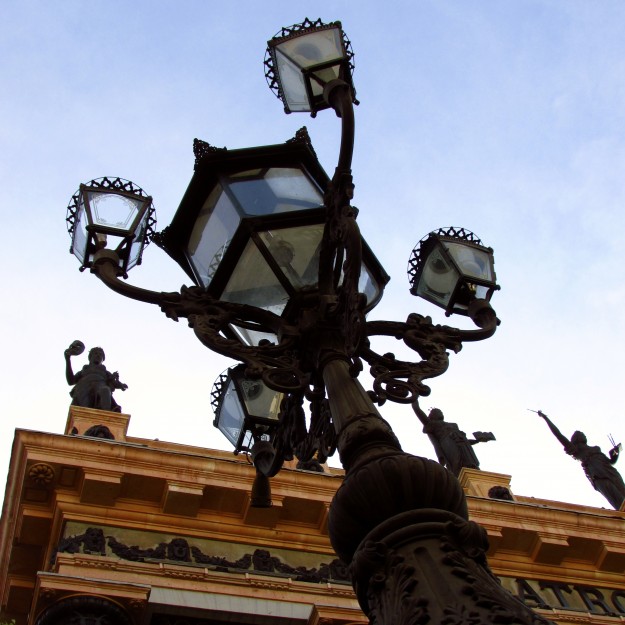 Guanajuato has LOTS of old buildings to look at, something My Family could do all day.

It was on a hill, looking out at another hill covered with colorful homes. There was no one around when we arrived, so Jason set up the camper and we waited to make sure it was okay to stay there. Guanajuato is very different from anywhere we’ve been since California. I could tell we were really high, as it was kind of cold and very dry. When we finally saw the woman who ran the RV park, it was almost nighttime. She was super nice and looked like an abuela (that’s grandma, in Spanish), and treated us that way. She didn’t speak any English at all, but My Family was still able to communicate with her. Now that we knew we could get set up, we faced another little problem: we hadn’t stopped for groceries. I had plenty of food, so I was just fine. But it was slim pickings for Victoria and Jason. They ended up making weird egg salad sandwiches for dinner, and shared desserts of their jiggly, jelly-like things called flan that came out of the same kind of package as yogurts. I didn’t get to try any of it, and for the first time this trip I was totally fine with that. After dinner Jason didn’t feel really well, but it wasn’t because of the food. He had a bad headache, which I guess happens to him a lot when he first goes to a high elevation. Did you know our campground in Guanajuato was about 6,800 feet up from sea level? Considering just a couple of days ago we were sleeping at sea level, that’s a big change. I kept kissing Jason’s face, but I don’t think that was making him feel any better. Also, it was VERY LOUD there. Even though the houses were far away, you could hear at hundreds of dogs barking, and they just barked all night. Add on to that the dance music coming from places all over the city and the occasional earsplitting firework exploding in the air, and you knew this was very far from the silence of Lake Chapala! 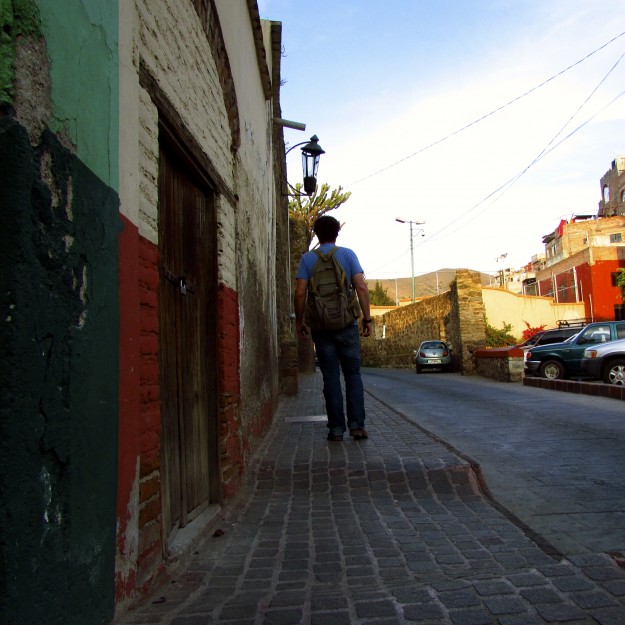 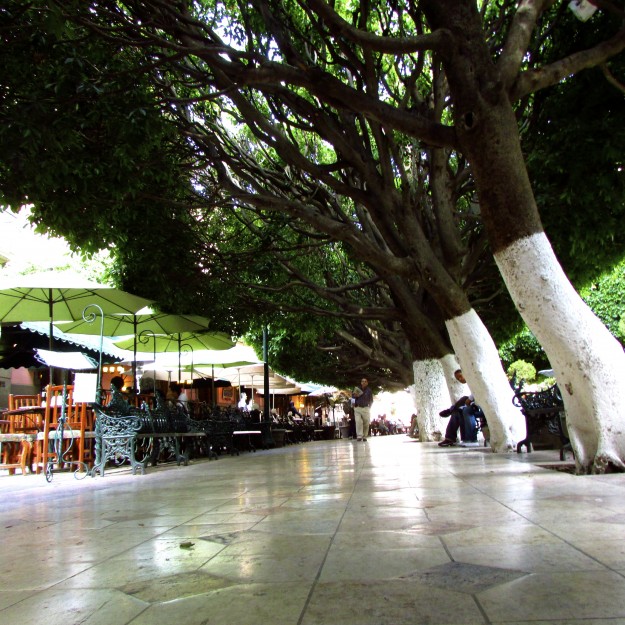 One of the many plazas we visited. The restaurants here didn’t let me in so I didn’t think it was that great here.

Jason was feeling much better when we got up the next morning, so we decided to go explore the city. Guanajuato is made up of huge hills and cobblestone streets and alleyways that snake from place to place. Everything is built at an angle. I didn’t particularly love the walk, but My Family really enjoyed looking at all the buildings. This was nothing like anywhere else we had ever been. We reached the bottom of our hill and entered the main part of the city to see that Guanajuato is covered with gardens, great restaurants and lots and lots of people. We saw cool street artists, musicians, and painters as well. Victoria and Jason found a piece of art they really liked, and they bought it for our camper. After walking around for quite a while we sat in one of the pretty squares for lunch. There was a dog that kept hanging around, hoping to get some of Jason and Victoria’s food. I knew I was going to be the one to get those tasty treats, but he just kept hanging out. And then Jason gave him his steak! I only got a small piece, and this stranger dog got almost half of Jason’s lunch! What’s up with that?! 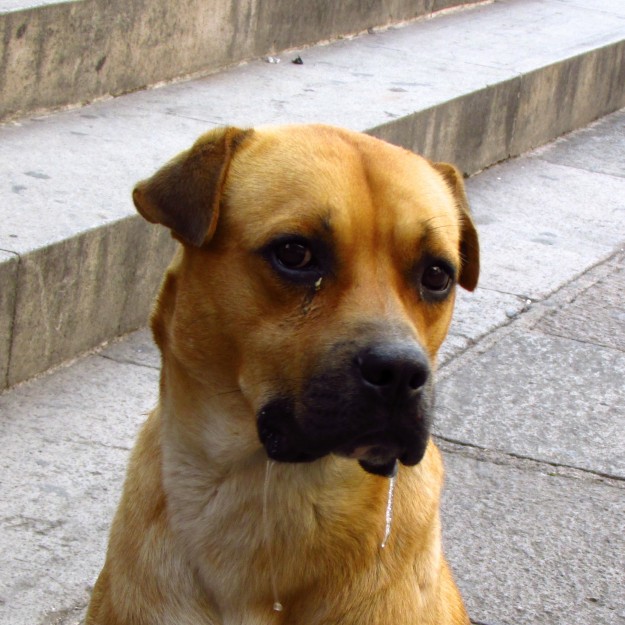 I sure hope he finds a Family of his own someday 🙁

Then I realized that this dog had no collar with his name on it, no leash to keep him safe, and no Family around either. I’ve never really thought about it, but apparently there are some dogs, and even some people, who don’t have homes. This dog was like that. He didn’t have anyone to snuggle with at night, no warm blankets, no fancy outfits, and clearly no delicious food. After the bite of steak Jason gave him , the dog started drooling a lot, like he had never eaten before! I realized it was a good thing that My Family shared with this dog, even if it meant I would have a little bit less. And the more I thought about it, the more I remembered all of the dogs we’ve seen on the adventure so far. Almost none of them had a Family. I can barely remember it now, because my life is so awesome, but I didn’t have a family at one point. I wish all the dogs-with-no-homes could find good people to take them home, just like Victoria and Jason gave me one.

PS: If you want to see some of the photos My Family took while we were in Lago de Chapala and Guanajuato, they are on Facebook.

7 thoughts on “Heading for the Hills”