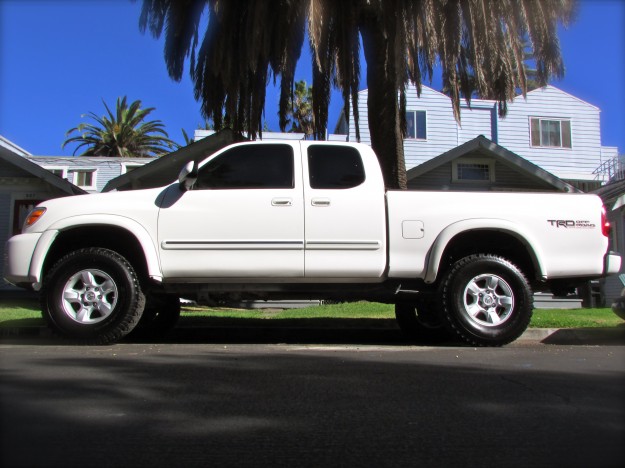 This is the truck. I can’t get into it unless My Family helps me…

Why we went with a Tundra

When we started planning the trip, we were pretty sold on the idea of a Sportsmobile.  After reviewing the balances in our bank accounts, we knew it wasn’t going to happen unless we postponed the trip for a while to save.  We also realized that unlike most of the other overlanders doing the same drive, we are planning on staying somewhere in Central America for a while, rather than continuing right on to South America.  The idea of having a Sportsmobile as our daily use car didn’t sound like something we wanted to do, especially since we plan on being involved in the community in one way or another.  We’ll be much more inclined to give people a ride or throw building supplies or what-have-you in the back of the Tundra than we would be to do the same with our home on wheels.

That left us choosing between tent-camping, whether on the ground or roof-top, and an SUV combo or a pick-up and slide-in camper combo.  We went with the pick-up/slide-in combo because really, glamping I can do for 6 months, real deal camping, not so much.

Jason’s Ford Explorer died in January as we were on our way to Utah.  It was either sink a couple grand into a car we knew we wouldn’t be keeping for that much longer or take the opportunity to find our truck.  We knew we wanted a 4×4 Toyota as they are easy to work on and (perhaps more importantly) gets parts for in any of the Americas.  After a month or so of hitting refresh on craigslist and multiple other classifieds several times a day, we found our Tundra!

We will make a list of modifications and repairs as they happen, but this is what we started with:

Modifications and Repairs before and during the Big Adventure

Our thoughts on the Tundra

We love our Tundra!  As you know, we chose the Tundra for the availability of parts while south of the border and for it’s reliability and we were not disappointed at all.  The truck got us everywhere we wanted to go, with no problems.  Other than overheating the brakes, which was basically an user-error, we had zero problems on this trip!  We would definitely recommend a Tundra to anyone planning a similar trip.